“Fiction has a truth exceeding that of history”
–Aristotle 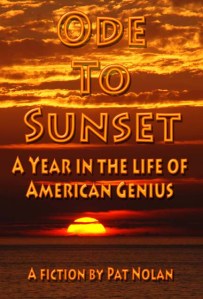 Two urges overcame him simultaneously.  He needed to offload the sugary drink from earlier at the beginning of his hitchhiking and his gut was signaling him with the “feed me” flag.  The large pale green building with the Western style false front had a sign above the double glass doors, Live Oak Bar & Grill, and in the large round window off to one side a twist of neon read Open. Once inside, he glanced around at the bar partly in the shadows further back from the natural light of window and doors.  He was looking for the facilities.  He noticed the knotty pine passageway leading further back next to the jukebox.

A silhouette detached itself from the shadows and stood by the cash register at the back bar, a younger man with a stubble of beard who nodded.  “What can I get ya?”

He stared at the chalk board menu letting his eyes adjust.  “Kitchen open?”

He noticed for the first time a couple of young men in ball caps seated at a table eating burgers from red plastic baskets, bottles of beer ranged between them.

He turned his attention back to the menu.  The lunch special was pulled pork sandwich with secret sauce, salad or fries.  He chose it as the path of least resistance partly at the urging of his bladder.

He hesitated.  A wise man would have chosen moderately, coffee, tea, soda.  “You carry New Albion?”

The bartender brightened.  “Sure do!  Lager, ale, or porter?”

He chose the lager reasoning that the porter would make him feel too full and the ale was a little too high octane for him right about then.  He pointed to the passageway by the juke box and was assured by a nod of the head that it was where the “men’s” was.

The young men at the table looked up as he walked by.  The silver suit was meant to stand out in a crowd in the city.  In the middle of nowhere it was an alien presence and an indicator that you thought you were some sort of superhero, jiveass, or pimp.  He’d gauged a similar reaction in the bar in Sebastopol the previous night, a place called Car Pet.  It had once been a carpet warehouse and the new owners, to save money, kept most the original sign intact.  It also housed a micro brewery and he had been stuck in a quandary over which style beer to order, there were so many to choose from. Now he just needed to pee.