“Fiction has a truth exceeding that of history”
—Aristotle 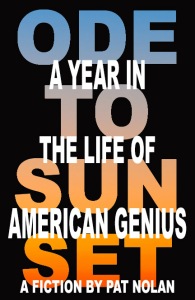 He stepped down from the cab of the pickup at the dusty pull-out to the coastal access parking lot as the driver offered his hand. “Didn’t get a chance to introduce myself.  Name’s Chuck,” he said with a conspiratorial smile, “Chuck Weddell.” Once again he was left to gather what he could from coincidence.

In the wake of the pickup’s exhaust a low slung Western style false front building of weathered wood with tall red trimmed windows and a large sign above a similarly red trimmed door announcing Heirloom Country Emporium came into focus across the two lane highway and appeared to shimmer in the light of a cloudless blue dome of sky painting the wind shaped landscape with a fine solar oil.  The next step was to get directions to Angie’s place.

A silver minivan swung by, and gauging the distance and speed of the oncoming white pickup truck from the opposite direction, he erred on the side of caution, waiting until horizon to horizon no moving vehicles appeared, and then strode across still alert to the possibility that any peripheral spark or notion could easily derail the tenuous concentration of purpose, whatever that was.

It came as the oft repeated story of an incident in Dumas’ Twenty Years After told by a French director of how setting light to a fuse on a keg of gunpowder to blow up the entrance to the castle, the portly Musketeer, Porthos, takes off running, and as he speeds away he becomes pleased with himself and the thought that what he has just done will do the trick, and that leads to the thought of how, hightailing out of range, after twenty years he still has the spunk and spark of his younger Musketeer self, and struck by the realization of how remarkable it is that the human animal can sprint in such a fashion, one foot in front of the other in quick succession, he becomes self-consciously aware of his pumping limbs which in turn causes him to stop in his tracks, amazed at the wondrous cleverness of God in his heaven, and is consequently hoisted by his own petard.

The annoyed beep of a car horn sounded seemingly out of nowhere and hurried the last few steps to the unpaved roadside and the front porch of the emporium festooned with antique bric-a-brac, rusty farm implements, and overgrown planters.

Once inside the door, fire trap came to mind, the dark wooden floor of the narrow aisle creaking underfoot, overstuffed with cheap imported inventory, mostly bright plastic gewgaws to attract children and easily attractable adults, beach gear, gaudy striped umbrellas and Styrofoam coolers, a tangle of gaily colored kites hanging from the ceiling, stacks of rubber flip-flops in mesh bags, boogie boards, garish tee shirts advertising the locale, and finally at the end of the tunnel of junk the jittery light emitted through the glass doors of the rattling ancient refrigerator case with its tantalizing array of drinks.  Not surprisingly he was parched.