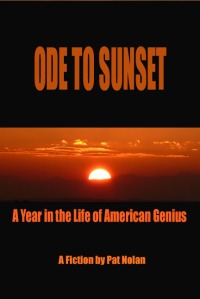 Don’t be paranoid? It pays to be paranoid. Paranoia is the first step in prophecy. Interpret the flight of birds. If there’s danger lurking, they’ll know. So far the only birds I’ve seen are gulls, some unknown black seabirds that shit enough to cover the rocks beneath them with calcium white slurry, and a flight of pelicans like workers returning home from the dayshift with their lunchbox beaks.

When I look back on the inevitable flight path of my life, it’s enough to make me paranoid. I struggle with paranoia as all unsung geniuses who think too thoroughly do. Val was the same way only so much more talented—a classic passive aggressive which fit perfectly with her S&M fantasies. She’d say one thing and the next second deny that’s what she meant.

Val. A one syllable mantra, the expiration of a breath. Just that. Val. A few months shy of fifty, from septicemia, invasion of the bloodstream by virulent micro-organisms from a local seat of infection. Blood poisoned, dirty needles they’d said. One year, one month, and five days ago at some unknown hour.

And so too Sheila, two old loves in the space of little more than six months. Although the door on that episode has long been closed, I still have an inventory of all the baggage stored behind it. The cancer shut her down the same day I left the hospital. A private memorial was held a few weeks later. I wasn’t invited. Or I was but too depressed and feeling sorry for myself, I couldn’t get out of bed. I pretended it hadn’t happened. To save myself the grief. Courtney’s anger was fierce when I bailed. That may have been when the regret for her generosity began. I had my ex-cuses, but that’s all they were. In some way or other I always manage to fail, to dis-appoint, the women in my life.

Nora had it right. “People care about you, Wendt, but they just happen to be the ones you push away.” But then it’s always been all about me.. Both Sheila and Val had basically said the same thing using almost the exact same words at one time or another. “You don’t care about me. You just want me around as an audience for your cleverness.” My whole history with women is fraught with the freight of my ambivalence and cowardice.

Sheila, toward the end of us, disdainful, critical of everything I did. Our paths had diverged. She wanted success, I wanted immortality. We would never see eye to eye. We talked past each other hoping that the close calls would reveal our secret desperation. The break up came soon after I had raged, “What do you want from me, eat seeds, shit flowers?”

Once, in a moment of inextricable moroseness after one of the many blowups with Val, I remember thinking “women will be the death of me.” I’ve kept it at the back of my mind like a get-out-of- jail-free card. But maybe I’ve been wrong all along. It’s not Sheila or Valerie or Wendy or Mac or any other women I’ve accommodated and who’ve reciprocated. Maybe it’s more abstract, that Dame Fortuna, Santa Fama will precipitate my downfall. Fame and fortune, if the first one don’t get you, the next one will. The original serial killer twins of poets.