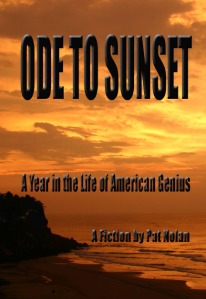 The glare of white sand shadowed to gray, rumbling waves lost their green sheen, and the hiss of dissipating foam edged closer.  Sea birds screeched, gulls hopped among the debris of apple cores, carrot ends, food wrappers left by his rescuers, and his own empty beer cans, slim jim sheaths, and chip bag.  Otherwise he was alone.  A wind skimmed the waves chilling the air. In the distance the orange orb crushed a stratum of cloud dyeing the horizon with the blood of its muted fire. “Suppose you really do, toward the end, fall away into a sunset which is your own self-ignited pyre,” the dying sun sang in his ears, a siren chorus with the shrill voices of cicadas.

Stupid.  And I am the exemplification of that stupidity.  Shake it off.  Gulp in breaths of denial that it can’t be all that bad.  But which is worse, the headache or the heartache.  The topsy-turvy scramble to regain mental balance in the face of an onslaught of contradiction and self-delusion painfully limited by my bone headedness or the gut churning, heart arresting, adrenal fueled, fear-based realization that it must end, and the immense futility of it all.  Is there hope, that mocking seductive chimera, fickle as flickering day or is there only dark despair and night?  Well, you live, you die.

Getting to his feet, wrapped in the blanket and feeling the full cold weight of being soaked to the skin, he stared out at the giant orange eyeball above the vast eyewash sea that seemingly demanded, “Just who the hell do you think you are?” He replied, “Nobody.”

All the bad luck, terrible accidents, cruel circumstances, the waking horror I’ve been through, brushed off simply to continue. I can hear people say “What great promise he had when he was younger.” At least I haven’t self-immolated as have so many of my contemporaries. Nora likes to joke, “There the smell of smoke about you, Carl, and I don’t mean cigarettes.  It’s all those burned bridges.”

Death’s contagion breathed on him the familiar names of the departed in just the last year.  Dorian Pillsbury, aka “Doughboy” aka “Poppin’ Fresh.” Valerie Richards aka “Valentina Fox.” His ex, Shelia Norby aka “Sierra North.”  Jeremiah “Jeremessiah” Beljahr. Candy “Tuna” Meltier.  Tomas “Tom Tom” Valorbruto.  Willy “Knickerbonkers” Hampton.  Lynal Pauk aka “The Lyin King” who hadn’t survived long without Dotty or his opioid habit, on New Year’s Eve, and giving the definitive answer to the question in the lyric of that old Holiday song. Tom “Toot Sweet” Trolley. Denny “The Touch” Darns, or as some called him “Don’t Touch Me There.” Jody Kervish, known as the Shirley MacLaine of poetry.  Faye “Ginny” Lawrence. Cathleen “Cat” Tchewlayder.  Al “Crock” Gayteur and his crocodile tears no more.

Me and my shambling machinations, in the end the question is who are these worthless pricks and why am I wasting my time trying to be one of them? I have no use for tight-ass flyblown poets, confining my associations to a few friends and lovers.  The lovers never hang around for very long, and the friends have become victims of the three deadly D’s of friendship: disaffection, distance, and death. It’s when those names come with a face and a memory of palpable interactions that are no longer active on the perceptual plane, having achieved the stasis of the infinitesimal, that the truth of mortality sinks in or at least gives pause to the recall of a vivid impression.  You live you die.